A personal blog. I am an: Award-winning writer. Non-profit entrepreneur. Activist. Religious professional. Foodie. Musician. All around curious soul and Renaissance man.

Fare Well and Thank You, Piano! 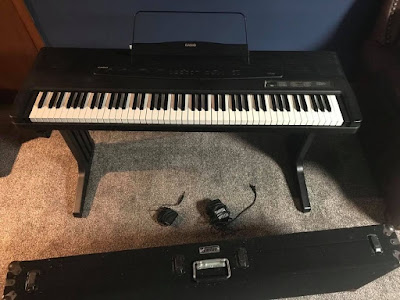 I swear I saw a tear in the corner of my dad's eye when he sold his bulldozer some years ago. His words: "I had that thing longer than I knew your mother." He had it over 30 years at the time, if not more.  I still remember it going down the road and away from the house on someone's trailer.
I kinda felt the same way selling my Casio electric piano tonight. I brought it probably in '93 or '94. Played gigs out with it. Made a lot of music with it. Wrote a lot of song with it. It traveled with me a lot of places. I chose apartments partly because of its size requirements. Some years it served more as coffee table than musical instrument (because that's what pianos do).

The case challenged everyone who attempted to lift it. It must have been made of reinforced concrete.

It's a CPS-80. I just learned the model number in order to write up the listing. The model number was staring at me for years as it was printed on the surface of the keyboard in big letters, but I never pay much attention to such things. I am not much of a techie when it comes to instruments. I can lead you in a deep, philosophical discussion of a musical instrument, I can tune in to its sound and vibe in an almost spiritual way, but I couldn't tell you the first thing about the model number or any other numbers that may be associated with it.

I initially purchased a Hammond B3 organ (I know that model name because it's part of its legend) and then quickly returned it. The Casio piano was the right instrument at the time.  It felt right. It was right.

It also had its limitations.

It was also time to go, though.

I hope it has a good second life. It sure lived a lot with me. Very few things are as sad as a musical instrument sitting unused and unplayed, and that was going to be its fate with me. Better to release it to the world where it can continue to live its vocation and get into whatever mischief it intends to. Maybe it'll spark someone else's imagination like it sparked mine.

I am most surprised by how I'm not that emotional about it. Nevertheless, I am taking the time to reflect so as not to rush over things. But I've spent far too much energy dragging around artifacts from the past in my boxes of souvenirs from this trip called life. Most of them I only see when I move from place to place and with every move and with every year their quality degrades. That doesn't do them justice. Yes, honor the past, but I want to spend my time on what's ahead more than on what's behind. There is work left to do and miles to go before I sleep.