A personal blog. I am an: Award-winning writer. Non-profit entrepreneur. Activist. Religious professional. Foodie. Musician. All around curious soul and Renaissance man.

On Balancing Sauntering, Down Time and Having Goals 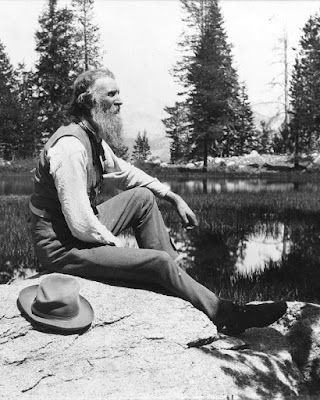 Hiking - "I don't like either the word or the thing. People ought to saunter in the mountains - not hike! Do you know the origin of that word 'saunter?' It's a beautiful word. Away back in the Middle Ages people used to go on pilgrimages to the Holy Land, and when people in the villages through which they passed asked where they were going, they would reply, 'A la sainte terre,' 'To the Holy Land.' And so they became known as sainte-terre-ers or saunterers. Now these mountains are our Holy Land, and we ought to saunter through them reverently, not 'hike' through them."


This meme has been sauntering through the internet. To that, I say:

Amen! Let's saunter through the mountains. Or not, whatever.

Everything is so scheduled now. I've fallen into that myself. I used to always naturally take time for down time, for drifting, aimless adventures that sometimes turned into something and sometimes didn't... meals that had no recipe just see where it goes... I think it made me a better person, more creative, more sure of myself, more everything. I think it made me more independent, my "center" was never some external activity. I think it's great for kids to learn how to navigate this kind of space, to trust your own impulses and find your way through the fog, and to make adventures out of nothing and follow your whims. Not to be overly worried about what you "should" be doing.


Maybe it's because I grew up in a small town where we had the good fortune of being bored a lot. There were no countless clubs or soccer games to attend. I'm not against all those activities, but once you learn how to have fun in an empty room, to paraphrase the Buddhist quote, then that is a gift you can carry with you your entire life. You don't need external stimuli.


I'm thankful I grew up before the internet and smart phones. Of course, older folks were worried my generation would be wrecked due to TV watching, so maybe it is good to take those warnings with a grain of salt. However, I actually think they were kind of right, but I managed to get enough of a glimpse of a better world. I quit watching TV when I was around 6th grade after watching far too much of it when I was younger and that really helped.


The downside is that it means that there were long tracts of time that are difficult to understand. There are stacks of unfinished projects of various types. Half-edited essays on social media whereas others are writing books. What did I accomplish? Should I have more "product" to show for it (a yucky term)? Where did my 20s go?


I think of some my peers in college who were med students, It seems like their whole lives were planned out very early and most of their hours were scheduled. Did they have enough opportunity to grow and stretch and do all those intangibles? Do they recognize the value in doing so? Or were they simply prudent, made good use of their youth, put their skills in service of the world, and built a future for themselves in the meantime? Sometimes that doesn't seem like such a bad deal! Maybe none of us knew who we were when we were young, so maybe it's just wise to spend your 20s working through med school than working in some factory or office like I did. But do they even know who they are? Maybe they already do and that's why they could fit into a tract so early. Maybe they just didn't need to saunter as much. Or maybe with a secure income and career, they can devote their later years to that. Everyone's different.


Learning how to live a sauntering life while also being goal-oriented is something I have yet to figure out.


Every Saturday I used to wake up and just... whatever happened. Maybe I cooked. Cleaned. Maybe I wrote a song. Maybe I had an adventure. Maybe wrote a letter. Maybe bits and pieces of all of these. Maybe something wonderful happened. I miss being in that space. It's hard to look back and wonder... was I wasting time? well, no... but a lot of projects didn't get done this way... but those projects probably wouldn't have gotten started another way! Maybe nothing happened and I went to bed frustrated and unfulfilled, maybe a lot happened--unplanned and unscheduled but things still happened, often great things. But the head space to do this is really a precious thing which opens the door to so much. I miss it and don't enter into that space much anymore. I don't trust that things will get done if I don't schedule them and get serious about goals, but then the very joy that was necessary for those goals is harder and harder to find this way. I would lean and loaf and invite my soul.


Maybe down time is just a luxury you don't get when you have a family or when you want to turn dreams into reality. But I think people used to have more of it in generations passed.
Posted by Frank L at 11:14 AM

Email ThisBlogThis!Share to TwitterShare to FacebookShare to Pinterest
Labels: Sauntering